“You can't truſt folk ſongs. They always ſneak up on you.”
Granny Weatherwax in Terry Pratchett: Witches Abroad

This list links to discographies of the most important (to me, that is ;-) musicians and groups featured on Mainly Norfolk. You'll find a lot more of them in the comprehensive folk discography and in the record label discographies shown at the top of the navigation column.

Note: I inherited the websites for some artists hosted here: Sandy Denny (merging it with mine) and Trevor Lucas in 1998 from Willem Doornkamp; The Watersons and Martin Carthy in 2002 from Garry Gillard, and Ashley Hutchings, Joseph Taylor and the Kipper Family from Tony Rees via Garry. Thank you very much for your great work and for asking me to take over!
And thanks to Alistair Banfield too for his never-ending support and wealth of information. 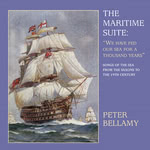 As this website is named in remembrance of Peter Bellamy after his first solo album, Mainly Norfolk, I thought I'd just list some Norfolk musicians featured here: